The Minister’s Meanderings: Adventures in Morocco 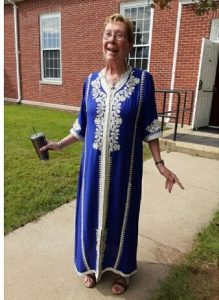 As you know, I recently had a wonderful trip to Morocco. I enjoy traveling to different countries and I try to soak up as much of the culture as time permits. I learned a lot about Morocco, which is an Islamic country in my all-too-brief two weeks there. We traveled through a large swath of the country that included terrain that varied from high mountains to the arid Sahara and eventually visited three cities along the Atlantic coast.

Our guide, Moha, was an Islamic Berber (as is 70% of the country). He was kind enough to share freely about his life and religious experience. As we traveled in our luxury coach, it was clearly evident that Moroccans are not Islamic in name only. Virtually every village, no matter how small, had a mosque with a towering minaret from which a muezzin calls the faithful to prayer five times a day.

On our journeys, Moha also talked about the five pillars, or fundamental beliefs, of Islam: 1) An acknowledgment that God is God and worthy of worship. 2) A commitment to prayer. 3) To engage in charitable works large and small. 4) Fasting (particularly during the holy month of Ramadan. 4) To undertake a pilgrimage to Mecca at least once in one’s lifetime, if possible.

I was impressed by the third pillar, to engage in charitable works. Moha explained that this is the only legacy we leave behind after we die. That the kindness and generosity to those we encounter, in large ways or small, are integral to Islamic faith. I had a direct experience of a deeply charitable act during my journey.

One day we took an excursion to the Ourika Valley. We meandered through the valley in the High Atlas Mountain Range, making several stops. Everywhere we went, we were surrounded by peddlers trying to sell us souvenirs. They followed us from site to site, badgering us to buy things. It did not bother me, because I realized that Moroccans had suffered terrible economic consequences during the pandemic and were struggling to support their families.

A highlight of the tour was to enjoy an authentic tea ceremony in a Berber household. When we reached the village and got off the bus, our peddler friends were right there hawking their wares. We crossed the street, and I realized the house we were going to was up an extremely steep, winding, rough path. I started to climb, but I was soon lagging behind the rest of the group and was not going to be able to make the climb unaided. Suddenly, one of the peddlers put his merchandise away and offered me his arm. He said, “Come, you take my arm, I will assist you.” I thanked him profusely and accepted his arm. He guided me to the home and said, “I will wait right here for you and escort you back down the hill when you are done.” The tea ceremony took an hour, yet when I emerged, there he was, waiting to escort me back to the bus. He did not ask me to buy anything and sacrificed his chance to sell to others by helping me. I thanked him again as he made sure I got back on the bus safely. I tried to give him twenty dirhams (about $2.00), but he would not accept it.

I met many wonderful people in Morocco, but the charity extended to me by one peddler on a winding path in the Ourika Valley will remain in my mind and heart as long as memory lasts, for he sacrificed his livelihood on that day to assist a Christian woman he did not know and would never see again. That is true charity. Salaam alaykum. Peace be upon you. 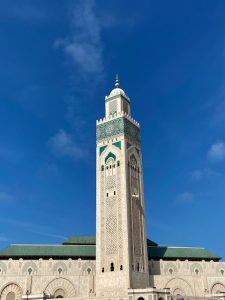 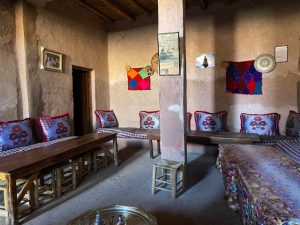