The Pastor’s Ponderings: What do bunnies and eggs have to do with Easter? 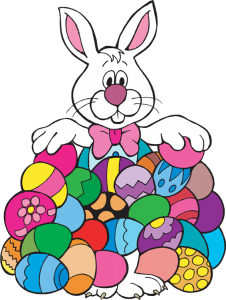 Christmas is a memory now and we have begun the season of Lent. Lent began on Ash Wednesday, February 25 and culminates with our celebration of Easter on April 12. It is a period of forty days less Sundays which is traditionally a time of reflection, re-evaluation and repentance. Throughout Christian history, Lent has been an occasion for looking inwards and focusing on our faith journey and on being in a positive relationship with God.

In thinking about the journey of Lent leading up to Easter, I realized that our culture has commingled secular and ecclesiastical traditions. As with Christmas, with its jolly Santa and gift-giving, Easter is being co-opted by culture with its Easter bunny and colored eggs. We know where Santa came from – St. Nicholas, but what about the Easter Bunny and those colored eggs?

As with many of our Christian traditions, the Easter bunny came to us from ancient fertility stories. The rabbit and the hare are among the most fertile of animals, so they came to represent new life in the spring. The rabbit as an Easter symbol began in Germany, where it was mentioned in writings as early as the 1500s. The first edible Easter bunnies were made in Germany in the early 1800s. German settlers brought the Easter bunny to the United States when they arrived in Pennsylvania Dutch country in the 1700s. A visit from the “Oschter Haws” was a thrill rivaled only by the visit of Christ-Kindel (Kris Kringle) on Christmas Eve. Children believed that if they were good the “Oschter Haws” would lay a nest of colored eggs.

The use of eggs as a symbol of spring and fertility is also centuries old. Eggs were painted bright colors to represent the sunlight of spring. Colored eggs were also used symbols of love, much like valentines, and given by lovers to one another to express their romantic sentiments. By medieval times, decorated eggs were given as gifts to servants at Easter and to children along with other Easter gifts.

Since Easter is in the spring in most of the Northern Hemisphere, we incorporated spring fertility symbols into our observance of this most sacred of holidays. So, that’s how bunnies and colored eggs came to be associated with our Easter celebration. I don’t advocate that we eliminate the Easter Bunny, colored eggs, or chocolate bunnies for that matter, but let’s keep them in their proper place; one that is secondary to the true observance of Easter.

For me, Easter is a far more important holiday than Christmas. I don’t know of anyone else who died, was buried, and rose again to secure a place for us in eternity. And that’s worth celebrating with bunnies, colored eggs, chocolates, and a whole lot more!