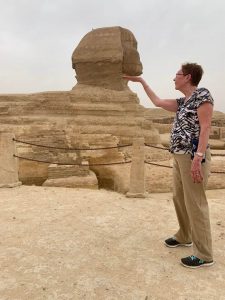 As I stood in the shadow of the Sphinx in May, I talked with my guide Maged Elbeh. It was late in the afternoon on a hot May day. Fortunately, it was cloudy and there was a breeze in Giza that day, so it was very comfortable. We lingered near the Sphinx as Maged taught me ancient Egyptian history and religion. I was very lucky that day, I was his sole tourist to guide through the Egyptian Museum and the Pyramids at Giza. It meant we could go at our own pace and take plenty of time to explore the rich history of the Great Pyramid, one of the Seven Wonders of the Ancient World.

Suddenly, all across Giza and adjacent Cairo, there was a mournful, lyrical call. Mu’azzins occupied every minaret of every mosque issuing the Adhan, the call to prayer. The fard salat, the obligatory call to prayer, is heard five times a day throughout the Islamic world.

I asked Maged to explain the words to me. He was kind enough to oblige. He explained that the mu’azzans call the faithful to prayer beginning with the words, “Allahu akbar” (God is the Greatest). The Adhan (call) goes on to proclaim “I bear witness that there is no God except God. I bear witness that Muhammed is a messenger of God. Come to what’s good, come to prayer.” All Muslims who are able are called to the Mosque five times daily. Maged, because he was working, could make his prayers later.

I learned a lot from Maged that day, about Egyptian history, about Islam and about modern Egypt. Maged and his wife are both tour guides, mostly in Cairo, but they will also travel to other historical sites within several hundred miles of Cairo with visitors. They both have university degrees in archaeology and history. Maged has been a guide for 28 years.

After the day of touring was over, Maged returned me to my hotel, where his wife was just returning with another tour group. We met and chatted, Maged and his wife extended the invitation for me to come back to Egypt to be an honored guest in their home. They enthusiastically promised I would have a “real” Egyptian experience; dining on classic Egyptian foods and visiting places not normally shared with tourists. I would love to go back and take them up on their kind offer. We are now Facebook friends and are in touch often.

My experience in Cairo is why I treasure the ability to travel. As I explore places I’ve only ever seen in books or dreamed of going to; I make personal connections with all kinds of wonderful people. You might say Maged & his wife are very different from me, but they are not; we share the same love of our friends and families, our countries and our God and Creator. Allah is God, the God of Abraham, Isaac and Joseph.

Through travel and interactions with other cultures, we can all forge bonds of understanding, friendship and affection with one another that transcend politics and misconceptions that cause fear and unnecessary hostility. May God be praised.