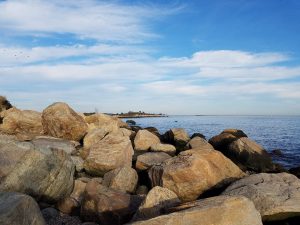 Early one summer day, God decided it was time for a vacation. Surely no one would miss him if he took the next eight to ten weeks off for some much-needed rest and relaxation, would they?

On the first day, he slept late, got up and had a leisurely breakfast while reading the Heavenly Tribune. He looked out the window and saw that it was a lovely day, so he took a stroll through town. The birds were busy gathering food for their fledglings, the bees were buzzing around the flowers, all seemed right with the world.

Yet God noticed that something seemed to be missing, there were no parents happily watching as their children played on the swings at the playground. In fact, the playground was deserted. God was puzzled but continued his walk. As he proceeded through the streets, he was surprised to find that there were no people anywhere, not in the grocery store, the coffee shop or even the Post Office.

His walk around the neighborhood finished, God returned home. He sent a text message to his friend Gabriel saying “Gabe, do you know where all my people are?” Gabriel texted back replying, “Don’t know. I’m on vacation. Gotta go, I’m going hang gliding today” and turned off his Smartphone.

God was tired from his walk, so he decided to take a nap. He slept soundly for about three days, when he awoke, he decided to stop by one of his many houses to check on how things were going. As he approached, he discovered that the doors were locked and there were no sounds of praise, prayer or rejoicing coming from inside.

Now God was baffled, where was everyone? He walked through the doors and found that the building was dark. As he walked up the stairs to the sanctuary, he could smell in the stale air that no one had been in this house for quite some time.

Suddenly, God could hear the sound of someone crying in the distance. He walked to the front of the sanctuary and found there was a woman sitting on the front pew weeping softly. “Why are you weeping, my daughter?” said God.

The woman replied, “I came here to worship the Lord and there was no one here to join me, and sir, you know that the scripture says, ‘For where two or three are gathered together in my name, there am I in the midst of them.1’”

God thought for a moment and said, “I had noticed that there didn’t seem to be any people anywhere in the town, I have been wondering where they are. Do you know?”

“Why of course” the woman responded, “they are all on summer vacation and have gone hither and yon to engage in all manner of pleasurable pursuits.”

“Ah, I see” said God, somewhat embarrassed, “I think I’ll change my vacation plans so that I have time to join you for worship, I would hate to think that the Holy Spirit would not be able to move among you for lack of two people to gather in the name of the Lord God.”

Suddenly, there was a great commotion outside. God and the woman rushed to the window and peered out. From every direction cars were approaching the building, people were walking from all over, converging where God and the woman were standing. The people flung open the doors and rushed upstairs. There they saw one lone woman standing in the aisle. “We heard that God was here! Where is He?” they clamored. The woman looked at them and smiled slowly, “He is here. God was going to take the summer off, but he realized we needed Him. I guess we do, even though we think it doesn’t matter whether we visit His home during our vacation.”

As the people filled the sanctuary they began to sing and praise in joyous celebration of their fellowship together: one people, gathered in one place, with one purpose – to worship the Lord God Almighty. There was great joy and celebration as the people realized that their lives were so much richer for having taken the time to worship together. Many prayers were answered that day, and the people found that they still had plenty of time to rest and play during the days and weeks that followed. God looked at his creation and decided it was still good, in fact, he decided he didn’t really need a vacation at all.

The moral of the story: No matter what your vacation plans are this summer; remember that God isn’t going on vacation. Whether you are here, and worship at your regular church, synagogue, meeting house or mosque, or are traveling, find a faith community to worship with this summer! Have a safe and restful summer and remember – Praise the Lord at all times in all circumstances!