The Minister’s Meanderings: Bear proves to be harbinger of spring 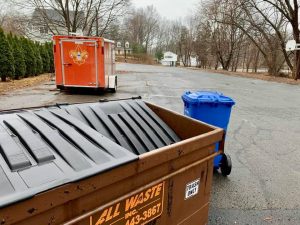 Spring is definitely here, and with it comes (soon, I hope) warm breezes, flowers, Easter and the Meriden Avenue bear.  I know this because said bear has been sighted out and about having awakened from its winter nap very, very hungry.

Our crafty visitor then took the bag and sat under a nearby tree.  He opened the bag, and much to his delight he found a feast delivered by the members and friends of the First Baptist Church.  You see, we had a festive potluck supper last Saturday night and dutifully bagged and put all our dirty plates, discarded food, napkins, cups, cookie containers and a variety of other tasty treats in the dumpster.  Needless to say, the bear was thrilled to be served such a fine repast!

I, on the other hand, was not so thrilled.  I didn’t have the bearish strength to pull the lid back out of the dumpster, so I had to call upon Bill McKay to drop by to lend a strong arm.  I did put on plastic gloves and manage to collect (again) the trash and place it in the dumpster – again.

What can I say?  The bear was hungry.  He found a great meal and enjoyed a potluck dinner.  The only thing that irks me is that there were empty American Baptist Missions offering envelopes in that trash bag.  He could have at least made a donation!