The Pastor Ponders in Turbulent Times 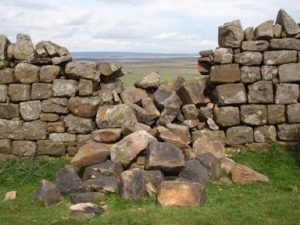 14For he is our peace; in his flesh he has made both groups into one and has broken down the dividing wall, that is, the hostility between us. 15He has abolished the law with its commandments and ordinances, that he might create in himself one new humanity in place of the two, thus making peace, 16and might reconcile both groups to God in one body through the cross, thus putting to death that hostility through it. 17So he came and proclaimed peace to you who were far off and peace to those who were near; 18for through him both of us have access in one Spirit to the Father. 19So then you are no longer strangers and aliens, but you are citizens with the saints and also members of the household of God, 20built upon the foundation of the apostles

and prophets, with Christ Jesus himself as the cornerstone. 21In him the whole structure is joined together and grows into a holy temple in the Lord; 22in whom you also are built together spiritually into a dwelling place for God.

[The text is exerted from the scripture passage from Ephesians that I reflected upon on July 15, 2018. Having been led by the Holy Spirit to speak out about the current bitter divisions in our country and our world, I present here a modified and abbreviated presentation of that message.]

We have so many walls that separate us from one another and keep us from building upon Christ, the true cornerstone there are almost too many to list. We continue to build walls, physical and metaphorical, to keep others out of our sacred “places” and our hearts. With our words and our actions, we reinforce those walls. Why do we continue to build walls to keep others out? Have we slipped into complacency and self-satisfaction as “superior” people, the favored ones of God? Therefore, we are the only ones who deserve the protection of the walls we so laboriously build? Perhaps it is because we are frightened of all those unknown “others” out there? Have we conveniently forgotten that Christ is still here to smash down the walls of discrimination, whatever they are, wherever we have built them?

Let’s reflect briefly on some of the walls that divide us from one another:

When I was in Israel last year, I saw firsthand the divisions our manmade walls have created there. As we traveled the length and breadth of the country, suddenly we would see a barbed wire fence running through the middle of the desert.

What is it? It is the artificial barrier built to separate the Israelis and the Palestinians. Never mind that in almost every village and town Jews, Christians and Muslims have co-existed peacefully in community for generations. We dined in a Palestinian restaurant, shopped in Palestinian shops and talked with Palestinian people who long for a homeland.

Why does American policy encourage the construction of more and bigger walls between people? We need to pray, work and cry out for peace and justice for all in the Middle East, and places of conflict around the globe. As Christians, why aren’t we committed to working to build bridges of understanding instead?

The United States has banned entrance to asylum seekers from seven predominantly Muslim countries. It doesn’t matter that many of these asylum seekers assisted our troops as spies and translators during recent conflicts in the Middle East. We fear that “they” will bring violence into our country.

The sad truth is that not one school shooting or mass gun assault in the United States has been perpetrated by a Muslim immigrant, radical or otherwise. They have all been committed by Americans. So why do we build walls to keep seekers of freedom out when the real assailants are grown and groomed in our cities and towns?

In scripture, we are taught that we are to build bridges of understanding between diverse populations, but we can’t even manage to get along with others who, though Christian, don’t interpret the Bible the way we do. We are far more likely to pick up bricks and stones to build bigger, better walls than to come together to try to understand and integrate our differences.

The same is true of people who embrace liberal or conservative points of view. We can’t even be civil in our dialogue anymore. Check out the news, or heaven forbid, Facebook or Twitter and you will see a stunning display of hateful rhetoric aimed at any who disagree with us. Look at our politicians who can’t seem to utter a civil word about members of the opposing party, let alone work together to build bridges for the common good. When we look at the racial, economic, social and generational walls we have built; we should drop to our knees and beg for forgiveness.

What walls have we built in our hearts? Have we built them with the express purpose of keeping others out? Do they keep us from sharing the Good News with others and welcoming them into our homes and worship spaces joyously as though to a family reunion? Do we withhold the Good News that through Jesus Christ the walls are torn down, that we now have access to God, the Father, by one spirit? That we can be and are citizens of one nation, one household?

Are there walls that keep us from accepting our rightful place in God’s household? Are we afraid to commit for fear of what this new citizenship might require of us? Would we rather remain aliens, foreigners, separate from the new covenant in Christ? Jesus is the cornerstone upon which our faith, our hope, and our salvation is founded. That cornerstone can bear your weight, my weight, and the weight of all generations that have come and will come after us.

The cross is the symbol of all the walls demolished by Jesus Christ. It is the cornerstone of a new dwelling place. Accept your place as a resident. Welcome all who would take up residence in this great household of God because “you are no longer strangers and aliens, but you are citizens with the saints and also members of the household of God, 20built upon the foundation of the apostles and prophets, with Christ Jesus himself as the cornerstone. 21In him the whole structure is joined together and grows into a holy temple in the Lord; 22in whom you also are built together spiritually into a dwelling place for God.” We are all brothers and sisters, heirs to the Kingdom of God. Christ came to smash through the walls. He is the cornerstone of our new home. It is a home founded on love and acceptance, not hate and rejection. It is time to break down the walls and put our faith where it belongs; on Christ, the cornerstone.