Skip to content
The Pastor Reflects on Her Voyage to China 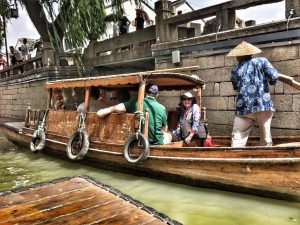 On Sept. 11, I embarked on an once-in-a-lifetime adventure: I flew from New York’s JFK International Airport to Beijing China’s massive international airport. I spent eight days traveling with a group of 38 travelers from all over the U.S. along with a Chinese Tour Director and several local guides.

Our tour set quite a grueling pace; we left our hotel somewhere between 7:15 and 8 every morning, toured for 8 to 10 hours, visiting multiple sites and walked anywhere from 3 to 6 miles every day. In spite of all this exercise I managed to gain 5 pounds from eating many wonderful Chinese meals while there (I will admit there was one day in Shanghai when the group had free time in Chinatown – yes, that’s right, the central bazaar in Shanghai is called Chinatown – we all found ourselves eating at McDonalds because there’s nothing quite like the taste of “home” when you are far away.)

We visited three major cities; Beijing, Xi’an & Shanghai. In Beijing we toured the Great Wall of China, the Imperial Summer Palace, Tiananmen Square, the Forbidden City, and the Beijing Zoo (pandas!). We then flew to Xi’an where we visited what is considered to be the eighth wonder of the ancient world, the Terracotta Army of the first Emperor of China. We moved on to Shanghai (another flight) and enjoyed three days in this bustling, urbane, growing city. While in Shanghai we traveled to Suzhou and enjoyed a gondola ride in the oldest man-made canal in the world. It was dug for the Emperor almost a thousand years ago and covers 1,100 miles. Quite a feat for Chinese workers who had no modern excavation equipment.

Through all of these adventures, 38 travelers all became friends. We shared many laughs together and spent endless hours entertaining one another on our bus trips. We all appreciated and came to love our Tour Director, Jason Yin, a native of Beijing who guided us the whole time, right up to our flight from Shanghai to catch our return flight from Beijing back to the U.S.

Personally, I was struck by the graciousness of the Chinese people. Even though very few spoke English (and we certainly didn’t speak any Chinese) they managed to convey a warm welcome and were happy to have pictures taken with us to show their family and friends. Western tourists are still pretty rare in China, so we were photographed as often as we photographed.

I returned home with a deeper appreciation of China and of the United States. China is a history-steeped country that is unfortunately a one-party police state where every move is documented by ever-present cameras; you never know if the person standing next to you on the street may be a member of the secret police. There were subjects, like the events in Tiananmen Square in 1989, which all Chinese are forbidden by the government to talk about. The United States certainly has its flaws, but I am grateful that we do have the right of privacy and free expression.

Would I return to China? Well, my visa is good for 10 years, so you never know